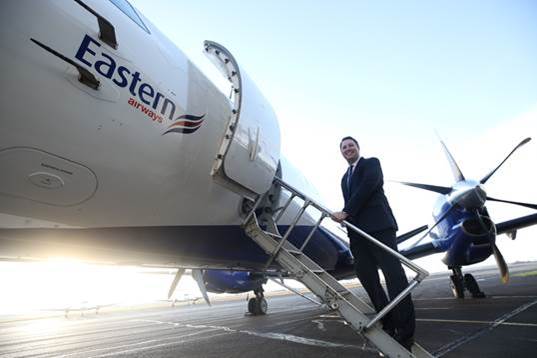 The service to Southampton Airport, which took off for the first time since Teesside International reopened to passengers, is ideal for quick access to the south coast and the popular cruise market. The Eastern Airways flight took to the sky at 12.35pm and the service will now run daily between Monday and Friday.

The launch of the Southampton service and Aberdeen and Belfast expansions come just a week before flights to Heathrow from Teesside are set to resume for the first time in more than a decade, connecting people from Tees Valley to the UK’s biggest airport and then onto more than 180 destinations across the globe.

Mayor Houchen said: “This is another significant moment for our airport. While other airports across the country are struggling, here at Teesside, we are launching another new flight and continuing to add more as we bounce back from the coronavirus pandemic.

“The Southampton flight will give people in Teesside, Darlington and Hartlepool quick and easy access to the south coast, which will be ideal for those going on cruises as the market begins to reopen. The daily service will mean it has never been easier to get from the North to the South.

“With this, and our Heathrow flights launching next week, our airport continues to fly high. Along with improvements to the arrivals hall and new state-of-the-art security systems, we are making sure Teesside International is a great place for everyone to fly from.

“But it isn’t just about flights. The success of our airport is also about supporting local jobs. We’ve recently had the first Willis aircraft arrive at its new maintenance base and we’ve also welcomed Neil Warnock to host Middlesbrough FC’s first press conference of the season. Despite the challenges the airline industry faces, it really is an exciting time for Teesside Airport.”

Last week, Mayor Houchen and Middlesbrough FC boss Neil Warnock announced the airport logo will feature on the back of Boro’s shirts for the 2020/21 season, and the sponsorship deal is the latest agreement in a long-running partnership between Teesside International Airport and Middlesbrough FC.

Flight information and more details on the latest safety measures can be found at www.teessideinternational.com